Trying to come up with something well-rounded. currently @ 1975

You're not in Sydney are you? Going to a 2000 point tourney in Sydney next weekend, wondering if that's what this is for.

I'm not really qualified to provide feedback on your list not having played much myself but the suggestion I can give you is that you probably need more sources of inspiring. At the moment you only have 2 sources so lots of your army will be out of their range leading to some lucky roling ruining your day. Perhaps swap one of those necros for a Litch for a little more support?

If you are going to the same tourney (would be funny if you are) you can check out my thread in this forum with my list.

Whatever tourney you're at, have a fun time.

Thanks for the response. I am in the USA. This tournament is about a month away. More inspiring is definitely something to think about. Maybe I'll give one of the necros the inspiring item. Some of these models are still in the mail, so I'll have to be flexible. Good luck at your tourney!

Yeah you too, I intend on posting a battle report, I hope you do too.

The tournament is this saturday, 3 games, using the Mantic tournament scoring.

Looks pretty good. I'd drop the mummies for more Wraiths based on the rest of your list. Not a lot of real hard hitters there, but enough troops that you'll be flanking with your surge plenty. Do you have a tactical plan on how you want to run your list?

The strategy was to have enough units to be able to handle flyer heavy lists by having a second line of smaller weaker units behind the main line. Also, tending to favor infantry regiments over hordes to make it easier to anvil and then surge into the flanks. Werewolves and flying pharoah would go after war machines.

Since my first two introductory games back in Sept, I wasn't able to get in any games, only listened to a bunch of podcasts and looked at forums. So Saturday who knows what will happen. My goal was to make a balanced list. If I had the models, i think I would have favored a mummy regiment. It was tempting to go with soul reaver cav regiment with macwarrs, as I am concerned about the lack of melee 3+. There is no list deadline so I could always change my mind.

W-L-D TP mantic format with attrition, the difference from mantic was TP modifier based on points killed differential in bands of 350 pts (rather than points alive in bands of 500 pts).

Fully painted got a small bonus (I did not qualify)

Summary Thoughts:
I came across a lot more infantry hordes than I was expecting (pictures will explain). My mostly regiment army struggles at times dealing with them, and if the hordes were tightly packed, had trouble executing surge to get into the flanks.

Brew of haste on the wraith troop giving a 22" charge caused some concern for opponents. I think this may have been giving them too much credit as they don't have much damage potential in frontal charges, but psychologically impacted things.

The cursed pharaoh with wings was excellent at destroying war machines, and racked up a nice total by the end of the day. He is not good at much else, which I knew going in. I am glad I saved some points by not going with a vampire. He was never really threatened in any of the three games.

I really learned how effective being in the woods is, especially when fighting cavalry. The decision whether to counter charge, and try to disorder, versus not doing so and continuing to allow them to be hindered was critical, especially if the objective is to stay alive for as long as possible. 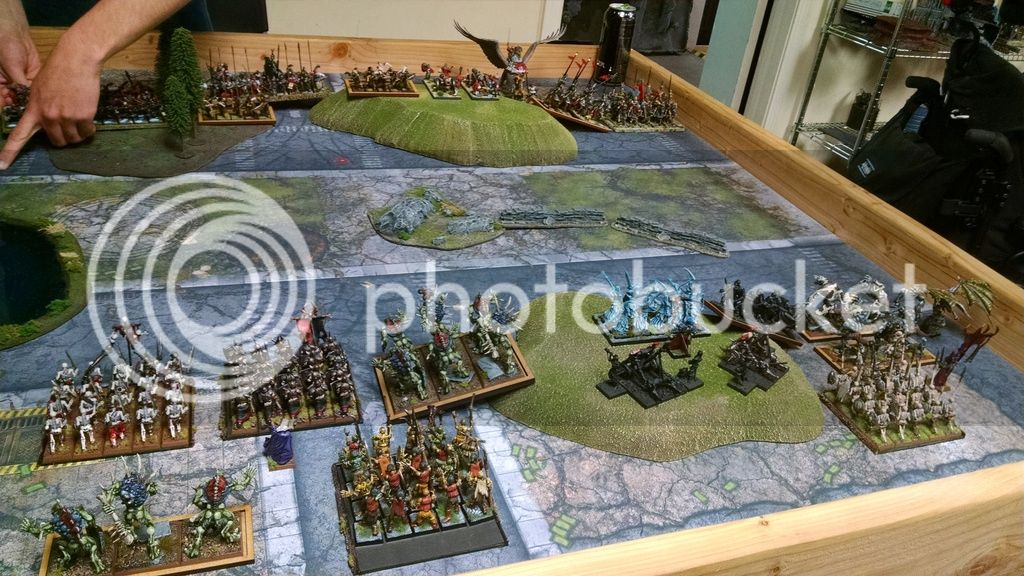 Kingdoms of Men start the top of turn 1. Two knight regiments oppose my right flank. Hero on winged beast, two cannons, cross bowmen troops, and a horde with CS(2). More hordes to the left not pictured. My wraiths and pharaoh are looking to get those war machines.

A look down the center. The Steam tank is a beast of war I think. That and two hordes oppose most of my infantry regiments on the left flank. 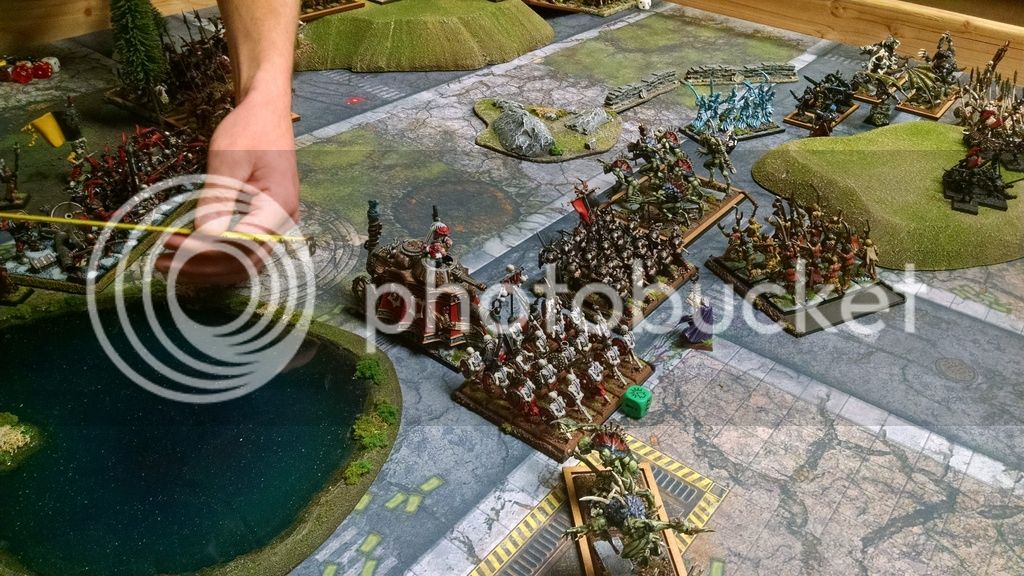 The beast of war crashes into the skeleton regiment. They countercharge and necro just cast bane chant on them. 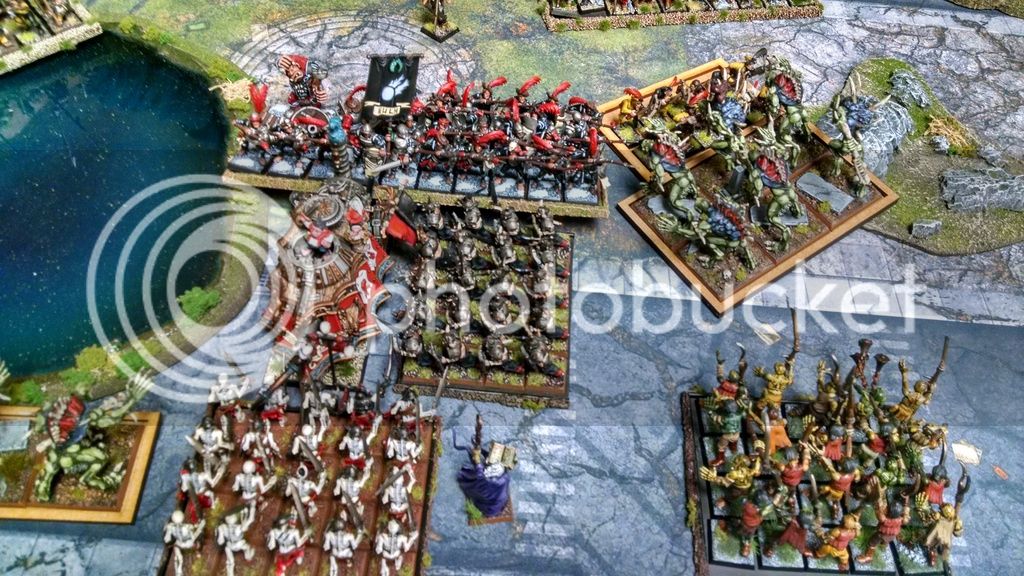 Revenant regiment gets the flank of the beast of war, as the zombie troll horde faces off against a crossbow troop, which charged it to prevent my trolls from getting the flank of his horde (forget the name) behind the beast. The other two hordes can be partially seen at the top of the picture. 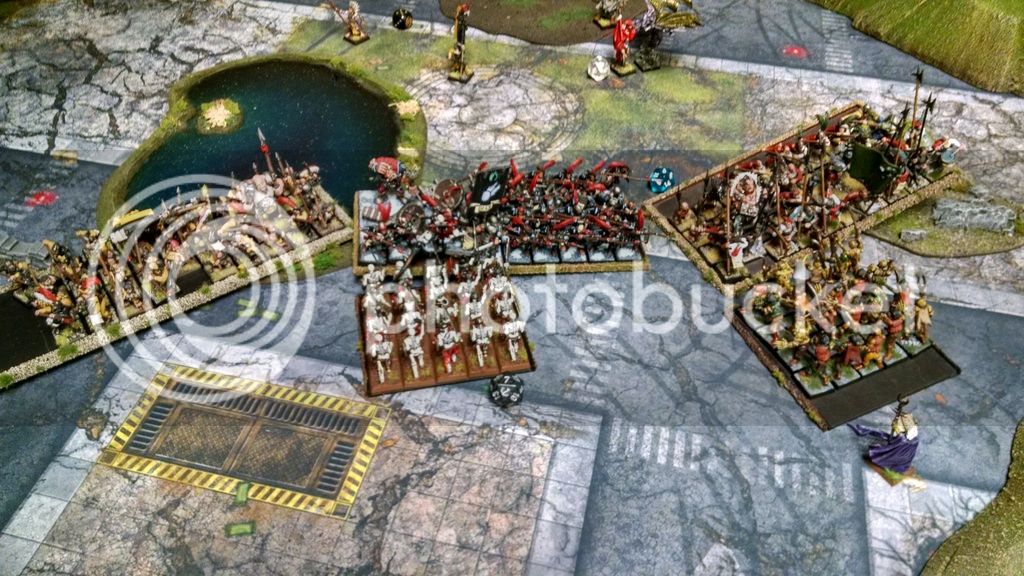 The beast finally goes down! My zombie troll horde bites the dust and the revenants also died after being flanked by the horde pictured in the center. Since this is dominate, the KoM player has got a lot of points on my side, and I am a bit thin on units to do much about it. Cursed pharaoh is at top trying to kill a BSB.

Prior to this image, my wraiths and pharaoh took out the cannons on the hill. The hero on winged beast took wraiths out. Also, I was able to bring down the knight regiments through combined charges (must have been too busy to take pics). I had stayed behind the obstacles, and we faced off for a turn or two trying to stay out of charge range, until one of us decided to make something happen. The details are fuzzy...

Trying to bring down the hero with flank attacks from spearmen and wolves regiments. Bottom wolves regiment gets wavered (by crossbow shooting from the left of the picture iirc). I am in need of some bane chants, but alas I did not purchase it for the liche king. Oh well...

Early to mid-game shot of the second game against the ratkin. Lots of opposing hordes! This is loot and my zombies (left side) have just taken the loot, but are about to pop with that horde hitting them in their flank. I had set up both my wolves units on my far left flank which were killed early. I also lost both my catapults quite early in this game, although that probably didn't affect the outcome too much. 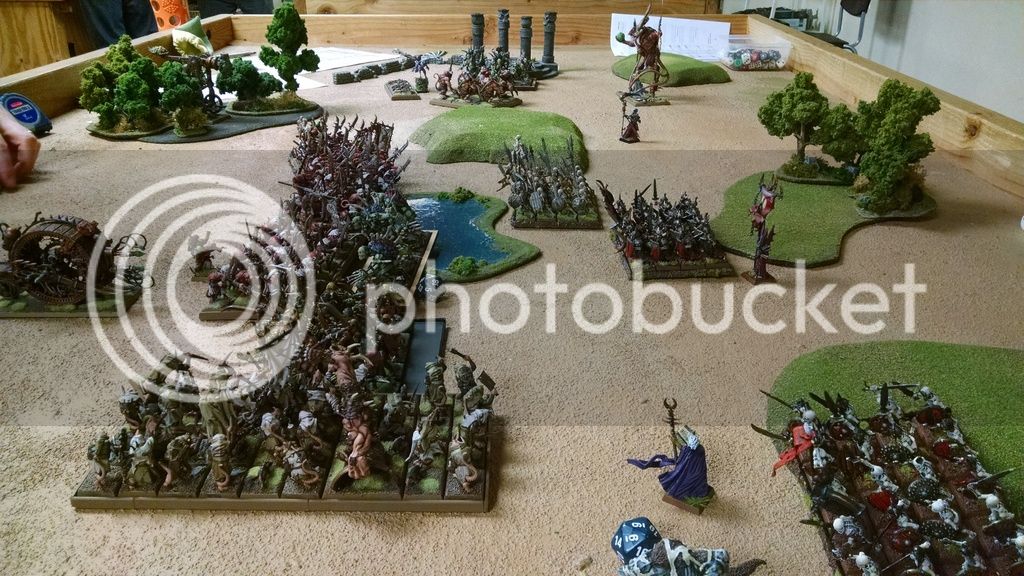 Here is a shot from my left flank down the centerline. My zombie troll horde way back by the columns has a loot token, and is facing off against a brute horde. Pharaoh is fighting swarms, and there is a living legend rat demon with CS(3) flying around my right flank. 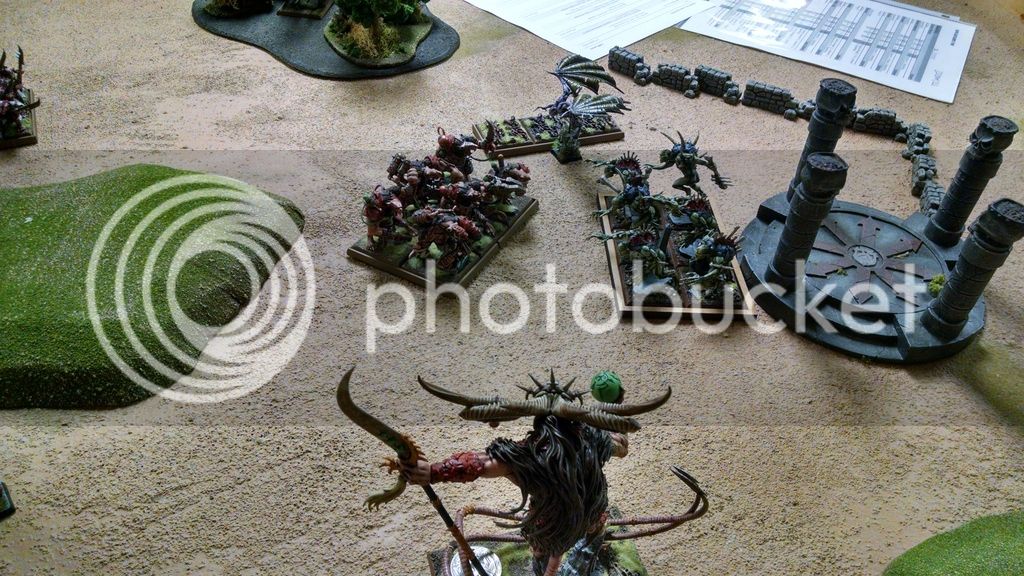 Here is a close up of what I described previously. His rat demon already has one token, and will eventually get the flank of my zombie trolls and take that token as well. I don't have an answer for this guy. My pharaoh is going to fly over the swarm into the woods (top left) and get a warmachine that is in there. 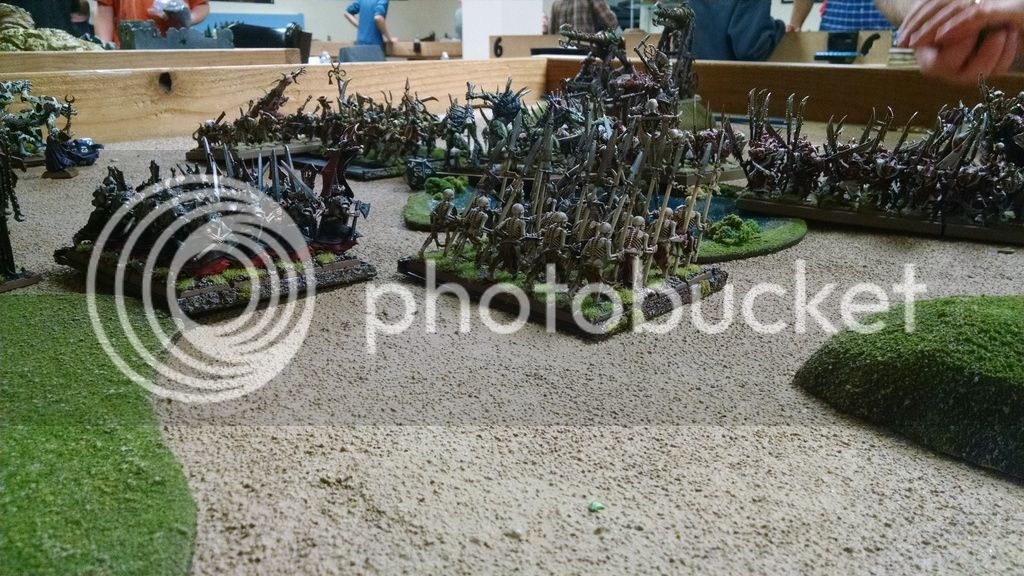 Here is another shot of the main combat on the left half of the board. We are fighting in and around a height 0 difficult terrain water feature. 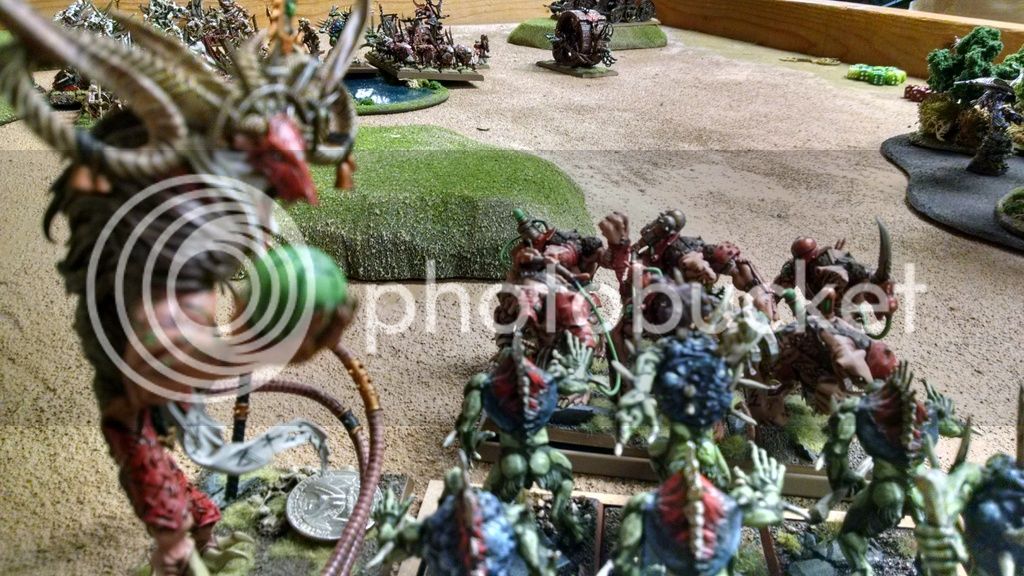 The rat demon eating zombie trolls! Winged Pharaoh, wanting no part of this combat, decides to go after more war machines on top of hill that is behind the doom wheel model. 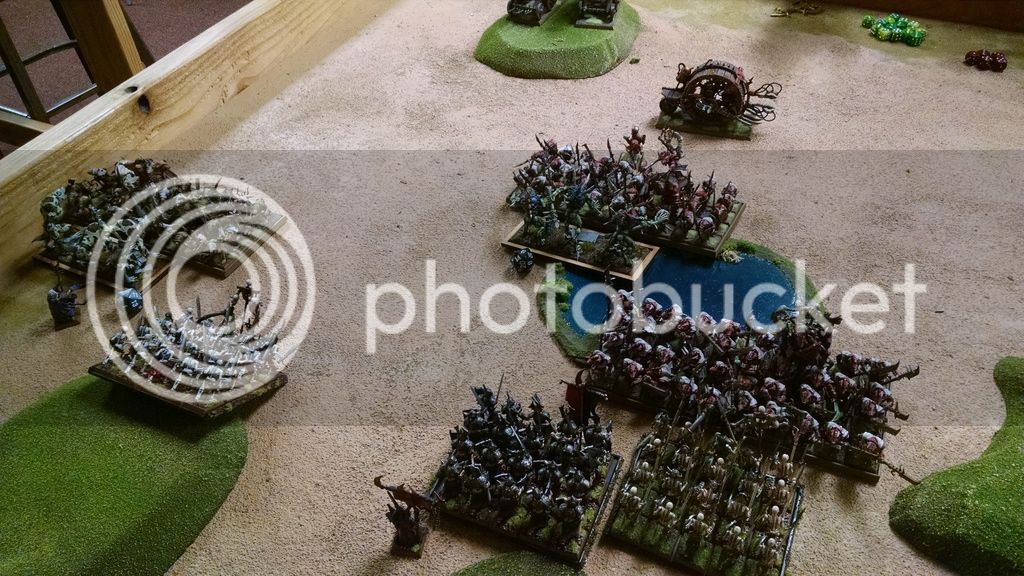 An overhead shot of the main combat. Regiments against hordes. 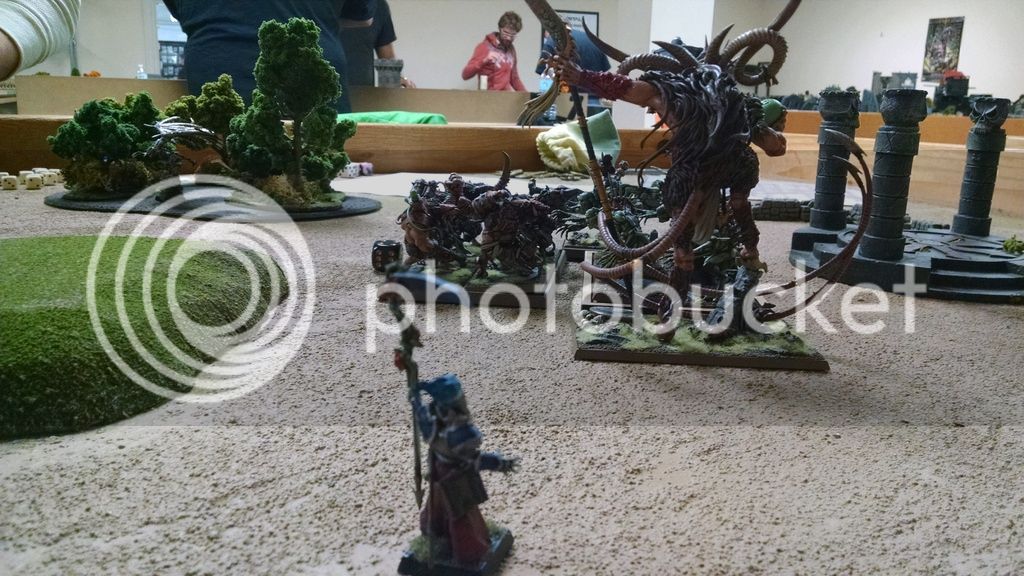 liche king can only watch! In this region I had tried to move off my table edge with he token using my mummy regiment. Casted surge on them and forgot it was not allowed. Anyhow, the rat demon had charged the mummies in the rear to take the first token, which happened prior to what is shown. 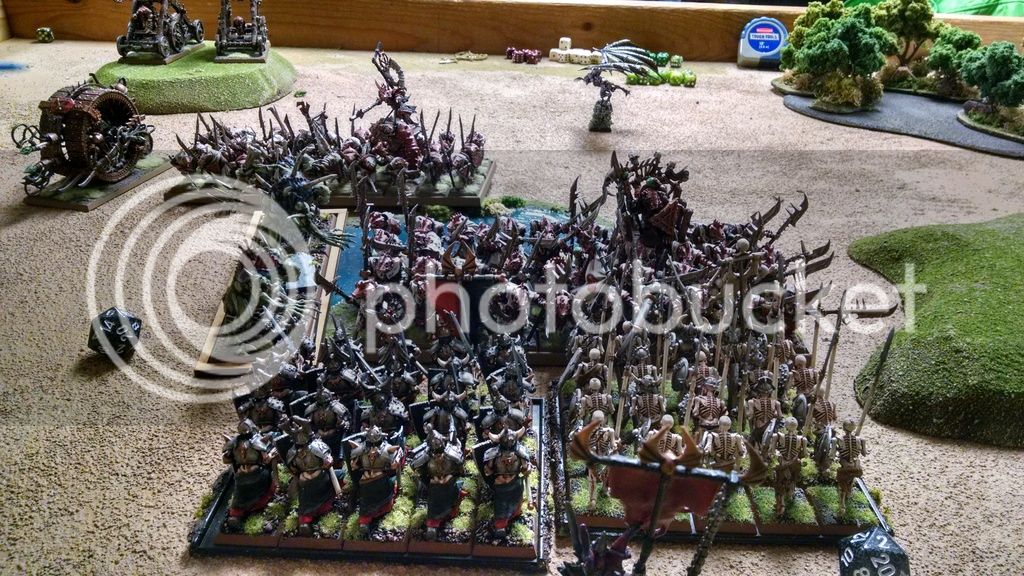 The major combat of the game. The zombie troll regiment refaces to the rear, and then the necro off to the left surges them into the flank of the horde, as revenants and spearmen attack the front. Pharaoh approaches the war machines. 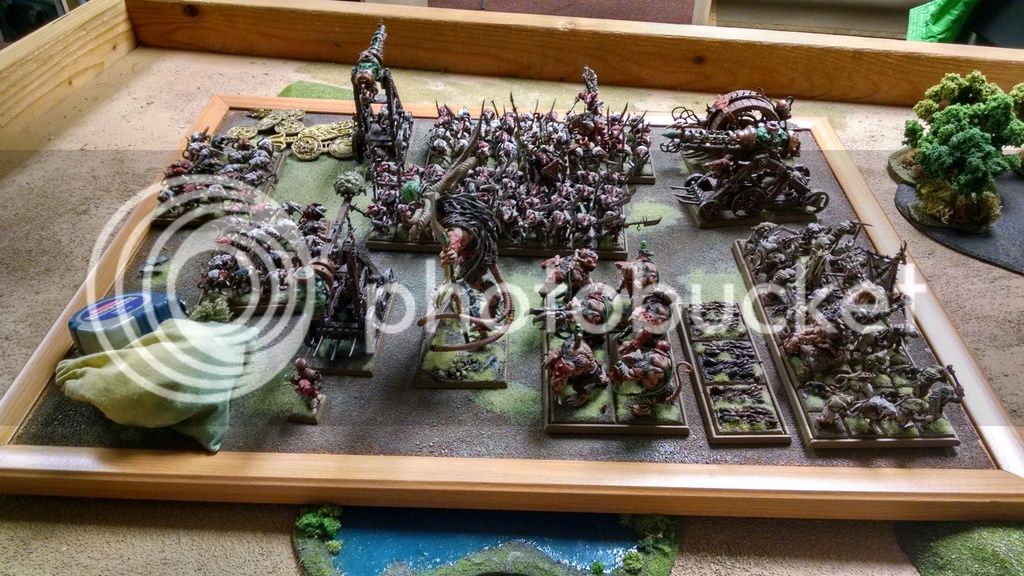 Army shot of the ratkin.

Army shot of the undead. 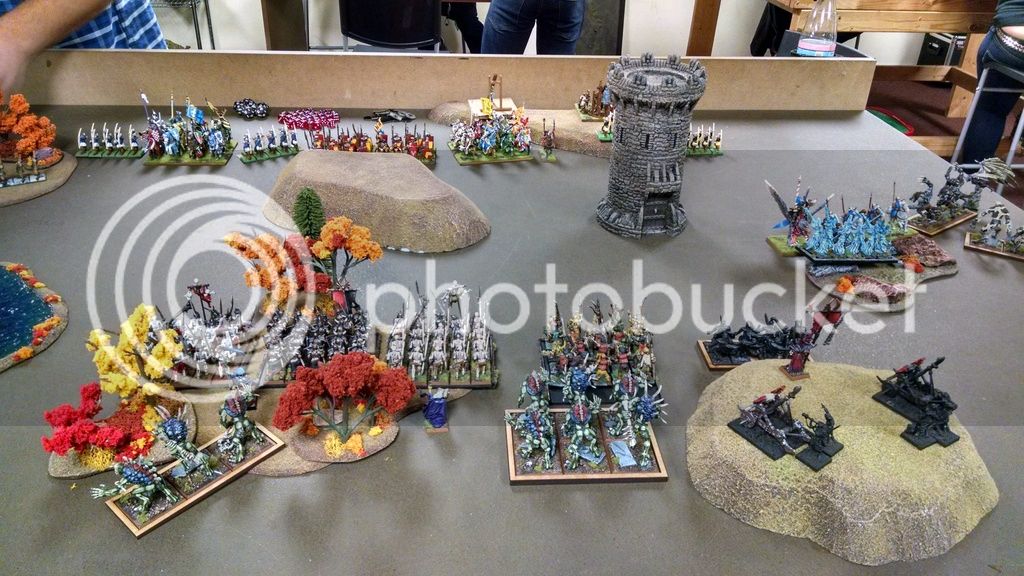 Early game shot of undead versus the brotherhood in the dominate scenario. The 12" bubble forms around the edge of the hill just forward where the three chip marks are. My main battle line is in the woods, leaving about an inch of woods in my front. The hero on flying monster fights the wraiths in the difficult terrain, as the two wolves regiments and the pharaoh try to sweep up the flank. There is another brotherhood knights regiment on my extreme left flank (not pictured). 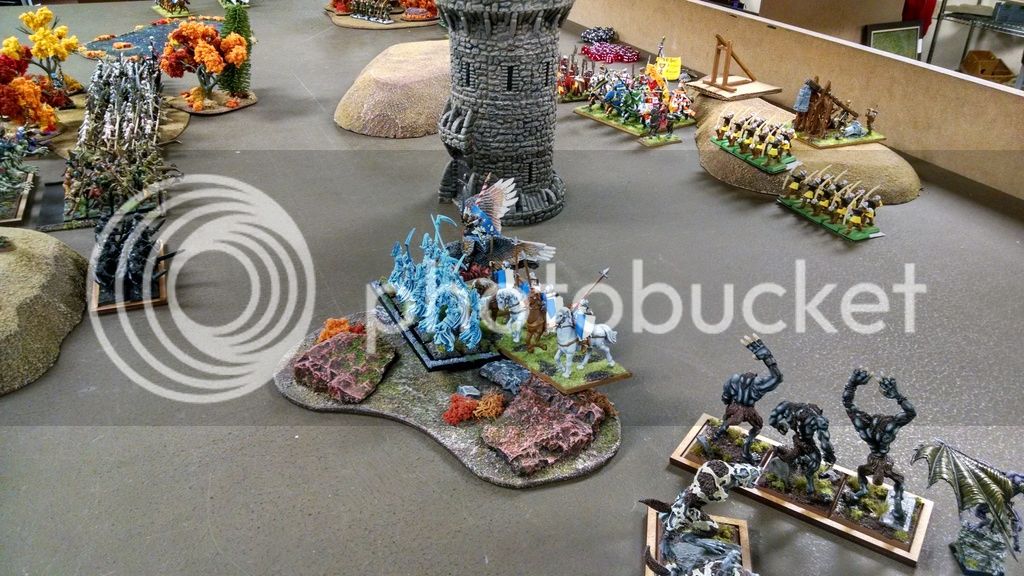 A view from my right flank. The brotherhood knight regiment will eventually come in behind the tower to fight the werewolves. The pharaoh (bottom right corner) is going into the trebuchets. The mummies troop (black primered guys) will make its way up to fight the hero on winged beast.

The hero on winged beast decides to exit the combat with wraiths and mummies and goes after my catapults on the hill. Werewolves face off against knights. 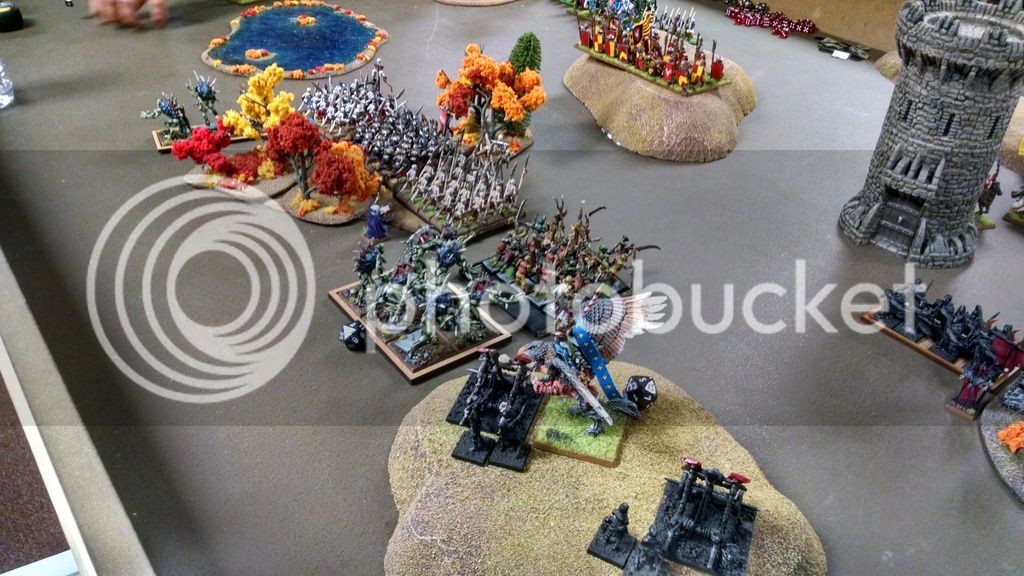 LOUEN LOUENCOUR smashes one of my catapults! A large horde of 6+ regen guys advances on top of the hill near the center. My main line remains in the woods. Knight regiments are moving around my left flank on other side of the water feature. The zombie troll horde will pivot 90 degrees and move 6, and the necro will surge them into the flank of the hero after it faces towards the tower. Hero end up going down. 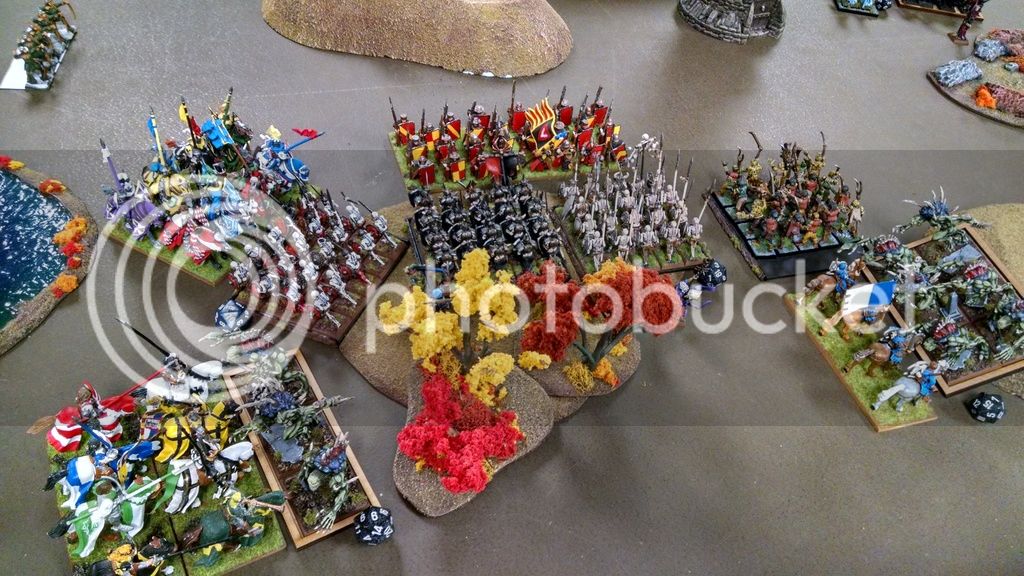 The infantry horde at the double moves just to the edge of the woods (getting inside the scoring zone). Knight units crash into my left flank. 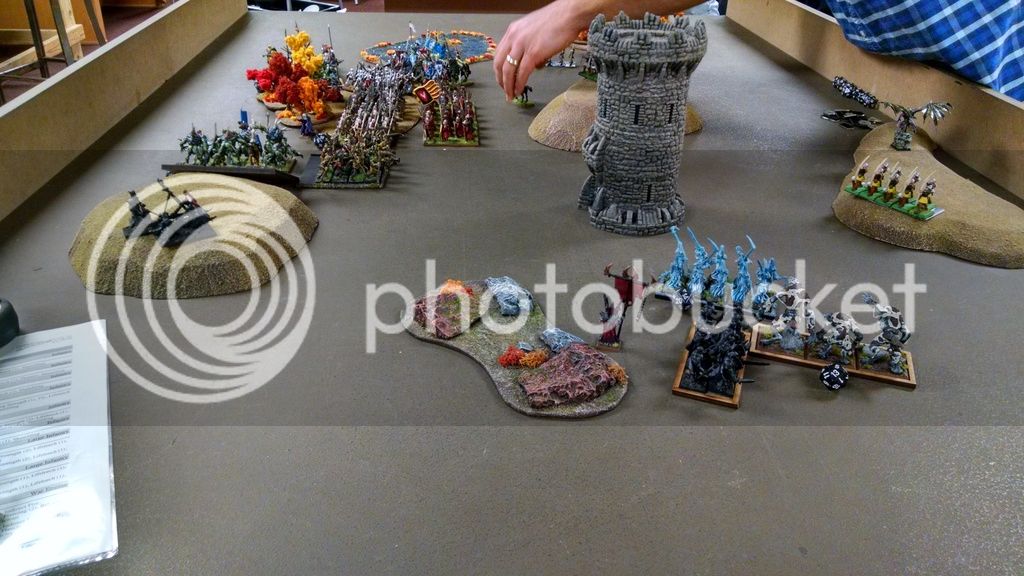 View down the center. Pharaoh just finished off the second trebuchet on the hill. The wraiths, werewolves, and mummies fought off a knight regiment by the tower. 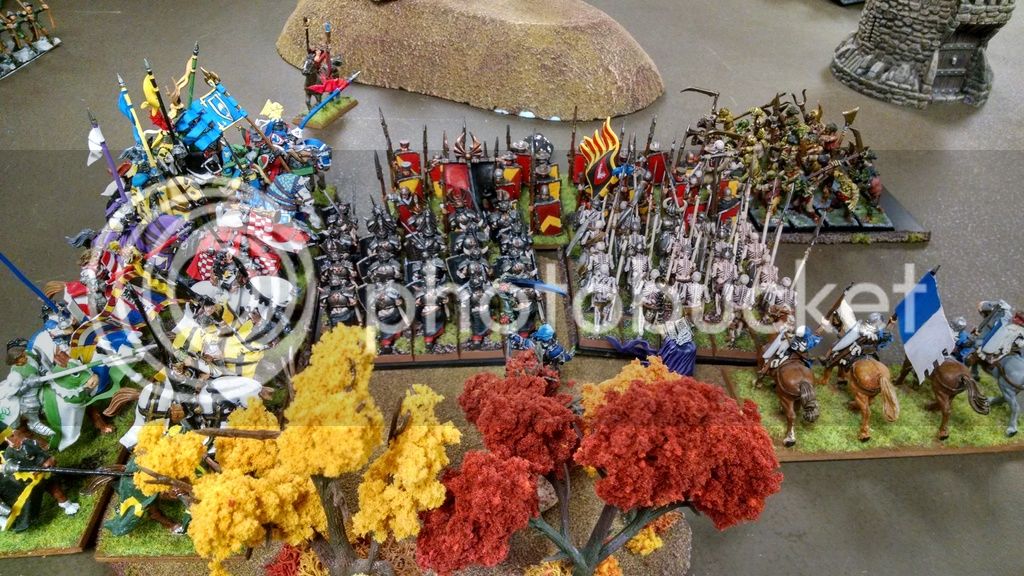 The knight regiments wipe the floor with the skeleton warrior and zombie troll regiments as they were no sufficiently in the woods to get the benefit of hindered charges. They are now facing the flank of the revenants in the woods, but I decide to combine forces to try and bring down the infantry horde, so this denies the knights the counter charge on the revenants, so no TC and -1 to hit. This was near game end and because the infantry horde was 190 pts scoring in the dominate region, and that factored into the decision to not turn to face them. The zombies show up my other infantry in the ensuing combat by causing a lot of damage from the flank. The brotherhood infantry horde has a route of 22, so it is taking everything i have left to get the job done. 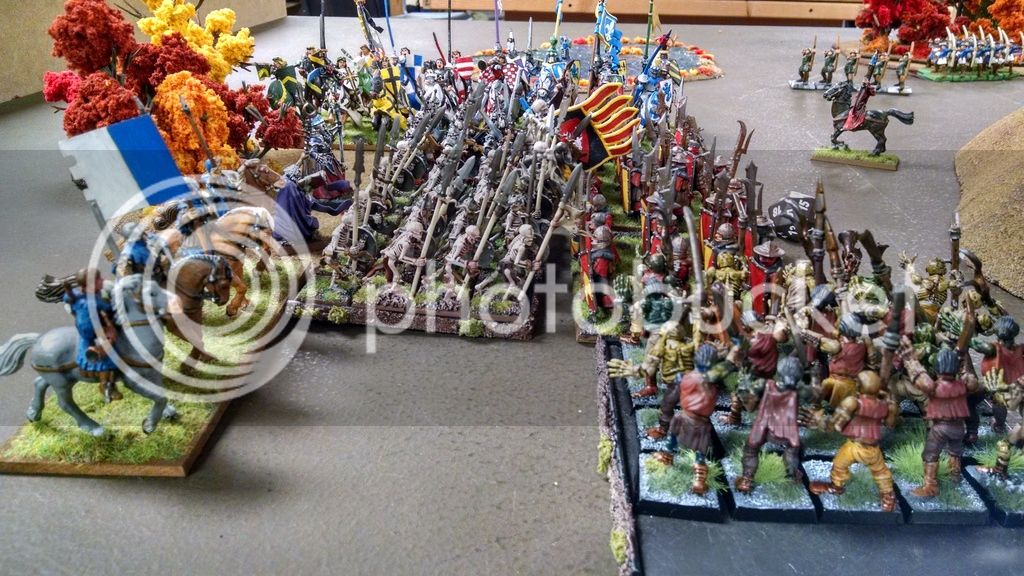 After many turns of doing nothing, the undead line finally shuffles out of the woods to meet the enemy! The center point for 12" radius dominate region is the hill edge at right. 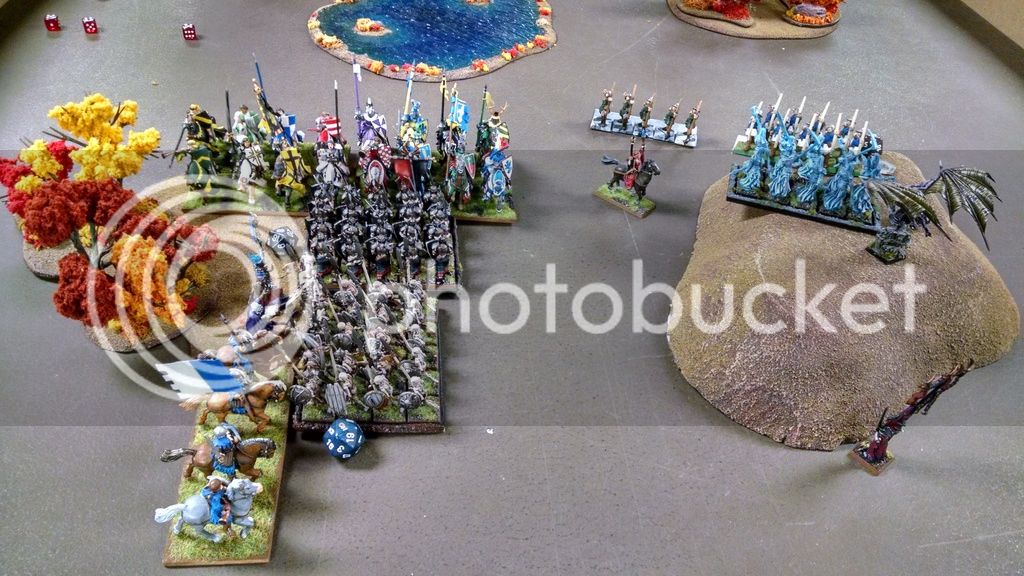 The brotherhood infantry horde is beaten. My opponent rolled for a turn 7 and its on! Both of us were hoping 6 would be it. The wraiths make a 22" charge to the archers on the hill, getting into the scoring zone. My BSB and pharaoh also make sure to get in the zone. The revenants are now facing the knights, and i don't remember if they survive, both units were hindered on opponents turn 7 (bottom). Can't say if spearmen died as well, probably so. This one ended in a draw as the knight regiment to the right was fully inside the bubble, and the points differential in the zone was <10%. I ended with a slight edge in points killed so got +1TP for that.